Menu
A MENU
Please complete our survey regarding After School Club: https://forms.gle/o74QB2dM2gSEVd2d9 You can find this link in the 'letters page'. Thank you!

This afternoon, we entered 3 (three!!) teams into the year 5 and 6 netball tournament at Great Longstone. One of our teams finished runners up and our three teams collectively won the ‘teamwork’ award. It was extremely pleasing that so many of our pupils wanted to take part in the tournament. Huge congratulations to everyone involved. 🏆

Wow! What an achievement! Today, 8 pupils represented our school at the Derbyshire Dales Sports-Hall Athletics Finals. The event was held at Highfields Secondary School and our athletics team competed against schools from across the Derbyshire Dales. The standard of athletics was high and after all track and field events had been taken into account, there was little separating the top three teams. This meant a nervous wait whilst the organisers totalled up the points and a real sense of tension when the results were finally announced. A HUGE CONGRATULATIONS TO OUR PUPILS WHO WON GOLD! 🥇 Whilst only 8 pupils attended the finals, credit goes to all of the Year 5 and 6 pupils, who all played a vital role in qualification. Earlier this term, a squad of 25 pupils finished joint first in the Lady Manners cluster competition earning us a place at today’s finals. 🥇

Another shiny trophy for our sports cabinet! Not only did our Year 5s and 6s finish joint first at the Sportshall Athletics Competition in Sheffield this afternoon, but they also brought home the ‘Self Belief Trophy’. Believing in ourselves is important - it opens doors and allows us to take chances, step out of our comfort zones and live our lives to the full. The pupils demonstrated this in abundance whilst competing against extremely talented opposition today. Another proud moment for our school 🏃‍♂️ 🏃‍♀️ 🏃🏽

🏆🏉Y5/Y6 TAG RUGBY CHAMPIONS 2021-22! 🏉🏆 Huge congratulations to our year 5 and 6 pupils, who all represented our school at the cluster schools’ tag-rugby tournament this afternoon. Great teamwork, unmatched enthusiasm and fantastic sportsmanship! We are all extremely proud of you!

Working on our fitness - climbing to the top of Mam Tor!

Today we added to our 2016 and 2018 tag-rugby winners medals. Both Stanton Sharks and Stanton Stags played exceptionally well and displayed bags of set-belief, teamwork and commitment.

Stanton Sharks managed to win all 3 of their group games which meant that they topped the group and they progressed to the semi-finals.

Stanton Stags narrowly missed out on a place in the semi-finals despite 3 well-fought games. Another point and they would have set up an all Stanton semi-final.

Sharks went on to beat Youlgrave before meeting Curbar in the final. Stanton coming out on top, winning 6 tries to 4! 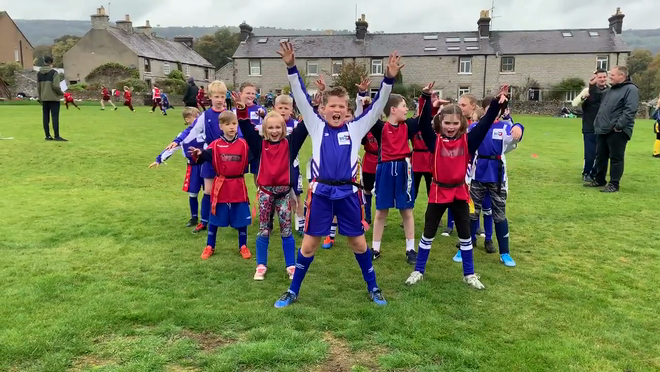 What a fantastic afternoon in Bakewell! The whole school took part in today’s cross country event and we could not be prouder of the children from Stanton in Peak. It was great to see everybody giving it their all. The determination and willingness to keep going was clear for all to see and was made easier by the fantastic support from the sidelines. Well done to everyone involved, particularly the reception children who took part in their first cluster schools competition. We have some great runners in our school, who should all check the school sports board for information about local running clubs!

Year 5 and 6 Football Tournament at Tideswell

We entered two teams into this year’s competition and all 15 players should be extremely proud of themselves for the way they represented the school.  Great sportsmanship and respect for the rules, opposition and referee were showcased throughout the afternoon alongside real grit, determination and teamwork.

One of our sides (Stanton Sharks) reached the final of the tournament and despite going ahead twice were pegged back to 2-2 in the closing stages of the match.  The game eventually went to penalties where we lost 3-1.  The players were gracious in defeat and were quick to congratulate their opponents, despite their own disappointment.

A great way to end the school sporting calendar - winning the Cluster Schools Rounders Competition at  Rowsley. Our team had a game plan, and executed it to perfection. Well done Stanton in Peak!

Well done to all pupils who took part in sports day this year, and thank you to all of the parents, grandparents and families that came to support! The weather was perfect and it was great to see everybody enjoying themselves.

Well done to all of the pupils who attended football club this term. You showed fantastic fitness (jogging down to Rowsley each week), superb skills and terrific teamwork during the matches.

Both teams made the school proud whilst competing in the Bunting Cup in Matlock. Our A team narrowly missed out on the trophy, dropping only 3 points from a possible 21!

The indoor athletics competition in Sheffield provided a great opportunity for our athletics squad to showcase their ability in various track and field events.

Torrential rain - a perfect excuse for tug of war!

Well done to all of the year 5s and 6s, who braved the bad weather and took part in the cluster schools netball competition at Longstone. We were unlucky not to progress out of the group stages with both teams missing out by the narrowest of margins.

What a fantastic afternoon we had at Longstone C of E Primary School on Thursday 25th November!

We entered two teams - Stanton Sharks and Stanton Stags. Both played exceptionally well and displayed all the qualities we work hard to promote during our school PE lessons - honesty, respect, self-belief, good teamwork and fair-play.

Despite beating Rowsley B team in their other group match, Stanton Stags finished second in their group after losing a very close match to Pilsley A team, 5 tries to 4.  This meant that they just missed out on a semi-final spot.  Quickly getting over the disappointment, they rallied together and finished strongly with a 6 - 3 win in their final match -  playing some fantastic rugby and scoring some well-worked tries.

Stanton Sharks won both their group matches against Youlgrave B team and Rowsley A team by the same scoreline, 6 tries to 1. They then faced a very good Curbar team in the semi-final.  With the match tied at 4-4, Stanton Sharks edged it in the final minute of extra time - sending them through to face Youlgrave A team in the final.

The final was very similar to the semi.  Both teams playing some great rugby and defending their try-lines with grit and determination.  At the full time whistle, the score was 2-2.  Extra time saw Youlgrave come very close to winning it, but Stanton's solid defence stood strong.  The final act of the afternoon saw Stanton score a breakaway try - fitting of winning any tournament.  After the final whistle was blown, our team was quick to congratulate their opponents, before celebrating their victory.

Congratulations to both teams! 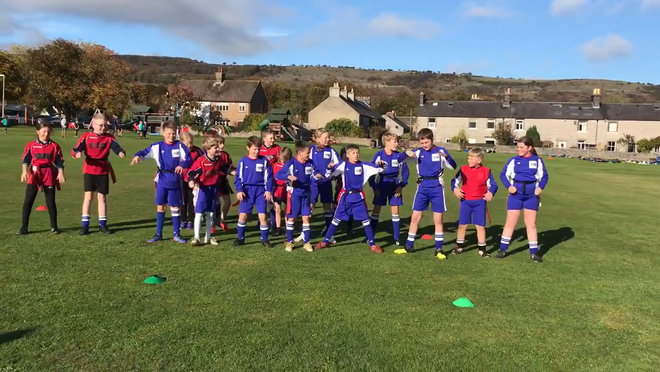 It was great to travel to Bakewell Juniors for the cluster schools cross-country competition. All pupils from Stanton in Peak took part in the races and joined in with the additional activities provided by the Extra Time event organisers.  It was pleasing to see the older children caring and looking after some of the younger members of our school and the reception children were particularly impressive as they took part in their first cluster schools competition.  Well done to everyone - we have some great runners!  Thank you to Bakewell Juniors for hosting the event.

What a fantastic afternoon in Tideswell at the cluster schools football tournament.  For the first time in years, we were able to field two teams.

Both teams should be very proud of their efforts and attitudes on and off the pitch.  Our A team finished RUNNERS UP and won all 4 matches on their route to the final, scoring a whopping 14 goals (and conceding only 1) in the process. Unfortunately, they were beaten by a very good Curbar side in the final. Congratulations to them.

Perhaps even more pleasing than the quality of football on display was being presented with the RESPECT AWARD at the end of the tournament.  Both our teams were said to have played with great respect for the game, their opposition and the officials.  Well done Stanton in Peak!

Sports day was a huge success with lots of smiling red faces at the end. We had a lot of fun races including: the sprint, bean bag throw, javelin, sack race, cross country, egg and spoon, the hoop race and the parents race.

Every child came home with a ribbon.

Everyone got a purple ribbon for taking part.

Every parent looked impressed with how their child did and appeared to take the mums and dads race very seriously! We were all very proud of them for having a try!

We look forward to seeing you at the year 5 and 6 rounders competition on the 12th of July 2018.

On Thursday 7th June the year 5 and 6 hosted a cricket competition. The year 5 and 6 played Monyash in the semi-final. If they had won they would have played Curbar in the final.  It was a very close game with Monyash just coming out on top. A very impressive Curbar were victorious in the final. We were all very proud of our 5s and 6s who showed great sportsmanship all afternoon.

Despite not winning any matches, we were still happier than ever and all took part in the festival which ran alongside the event.  During the festival we learnt lots of cricket skills.

Unfortunately not the ones with chocolate chips.

Some cookies are necessary in order to make this website function correctly. These are set by default and whilst you can block or delete them by changing your browser settings, some functionality such as being able to log in to the website will not work if you do this. The necessary cookies set on this website are as follows:

Cookies that are not necessary to make the website work, but which enable additional functionality, can also be set. By default these cookies are disabled, but you can choose to enable them below: